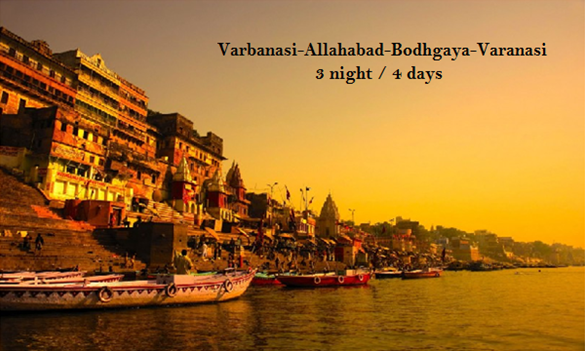 Day 01 -  Arrival transfer from Varanasi Airport / Station to hotel.
Varanasi, also known as Benares, Banaras, or Kashi, is the holiest of the seven sacred cities (Sapta Puri) in Hinduism and Jainism, and played an important role in the development of Buddhism. Hindus believe that death at Varanasi brings salvation. It is one of the oldest continuously inhabited cities in the world. Varanasi is also known as the favourite city of the Hindu deity Lord Shiva. later visit Temple tour. Varanasi is also famous for housing numerous temples. Several temples in Varanasi have great religious and historical importance in Hinduism. There are many temples, erected at different times throughout the history of Varanasi. Some of the popular temples are listed herein. In varanasi you will visit the most famous temple such as Bharat mata madir (Mother india temple ) Durga temple, Tulsi manas temple, Sankat mochan temple , Banaras hindu University, New Kashi vishwanath  temple(also known as Birla temple ). Later in the Evening visit Aarti ceremony, Experience the beautiful Hindu ritual Aarti on this evening tour in Varanasi, where Hindu mythology says the soul is liberated from the body. You'll learn about the combination of physical, metaphysical, and supernatural elements as you listen to religious songs sung in praise of the gods and watch lamps being raised into the sky on the River Ganges.O/night stay at  hotel.
Day 02 –Early morning Boat ride- Early morning boat ride at river ganga ,Boating down the Ganges River during sunrise is one of the main attractions in Varanasi. We can observe here the Hindu way of life along the banks of the Ganges (Ghats) River. Start your day with a morning boat ride at dawn. You have a chance to observe the Hindu way of life along the bank of the Ganges River (Ganga Ghat or Banaras Ghat). Varanasi presents a unique combination of physical, metaphysical and supernatural elements. According to the Hindu mythology. BACK TO HOTEL TAKE BREAKFAST LATER  drive to Allahabad (130 kms / 3-4 hours ).
Allahabad - Allahabad or Prayag is a large metropolitan city in the Indian state of Uttar Pradesh and the administrative headquarters of Allahabad District, the most populous district in the state and 13th most populous district in India and the Allahabad Division. The city is the judicial capital of Uttar Pradesh with Allahabad High Court being the highest judicial body in the state. As of 2011, Allahabad is the seventh most populous city in the state, twelfth in the Northern India and thirty-sixth in India, with an estimated population of 1.11 million in the city and 1.21 million in its metropolitan region. In 2011 it was ranked the world's 130th fastest-growing city. Allahabad, in 2013, was ranked the third most liveable city in the state (after Noida and Lucknow) and twenty-ninth in the country. After arriving in Allahabad visit the attraction point in Allahabad such as Trivedi Sangam, Anand Bhawan, Chandra shekhar azad park. Later drive back to Varanasi. O/night in Varanasi hotel.

Day 03 - Morning after breakfast drive to Bodhgaya (247 kms / 5-6 hours .)
BODHGAYA-
Bodh Gaya is a religious site and place of pilgrimage associated with the Mahabodhi Temple Complex in Gaya district in the Indianstate of Bihar. It is famous as it is the place where Gautama Buddha is said to have obtained Enlightenment (Pali: bodhi) under what became known as the Bodhi Tree. For Buddhists, Bodh Gaya is the most important of the main four pilgrimage sites related to the life of Gautama Buddha, the other three being Kushinagar, Lumbini, and Sarnath. In 2002, Mahabodhi Temple, located in Bodh Gaya, became a UNESCO World Heritage Site. After visiting B.gaya visit the local s/seeing such as Mahabodhi Temple. The Mahabodhi Temple (literally: "Great Awakening Temple"), a UNESCO World Heritage Site, is an ancient, but much rebuilt and restored, Buddhist temple in Bodh Gaya, marking the location where the Buddha is said to have attained enlightenment. Bodh Gaya (in Gaya district) is about 96 km (60 mi) from Patna, Bihar state, India.  O/night stay at hotel.

Day 04 -– Morning after breakfast visit some local places in Bodhgaya  such as  Bodhi tree as Bodhi tree.

The Bodhi Tree also known as Bo (from Sinhalese: Bo) and "peepal tree" was a large and very old sacred fig tree (Ficus religiosa) located in Bodh Gaya, under which Siddhartha Gautama, the spiritual teacher who later became known as the Buddha, is said to have attained enlightenment (Bodhi). In religious iconography, the Bodhi Tree is recognizable by its heart-shaped leaves, which are usually prominently displayed. The term "Bodhi Tree" is also widely applied to currently existing trees, particularly the Sacred Fig (Ficus religiosa) growing at the Mahabodhi Temple in Bodh Gaya, which is often cited as a direct descendant from the original specimen planted in 288 BC. This tree is a frequent destination for pilgrims, being the most important of the four main Buddhist pilgrimage sites. Other holy Bodhi trees which have a great significance in the history of Buddhism are the Anandabodhi tree in Sravasti and the Bodhi tree in Anuradhapura, Sri Lanka. Both are believed to have been propagated from the original Bodhi tree. Later drive to Varanasi (247 kms / 5-6 hours).

Sarnath-- Sarnath is a city located 13 kilometres north-east of Varanasi near the confluence of the Ganges and the Varuna rivers in Uttar Pradesh, India. The deer park in Sarnath is where Gautama Buddha first taught the Dharma, and where the Buddhist Sangha came into existence through the enlightenment of Kondanna. Singhpur, a village approximately one kilometre away from the site, was the birthplace of Shreyansanath, the Eleventh Tirthankara of Jainism, and a temple dedicated to him, is an important pilgrimage site.

Also referred to as Isipatana, this city is mentioned by the Buddha as one of the four places of pilgrimage to which his devout followers should visit, if they wanted to visit a place for that reason. It was also the site of the Buddha's Dhammacakkappavattana Sutta, which was his first teaching after attaining enlightenment, in which he taught the four noble truths and the teachings associated with it. Later  Deaparture transfer to Airport / Station.

Inclusion
1 - A/c Vehicle Inlusive of parking as per above itinerary.
2 -  Hotel 3* Room on CPAI basis.
3 - Boat ride in the morning.
4 - Site visit as per itinerary