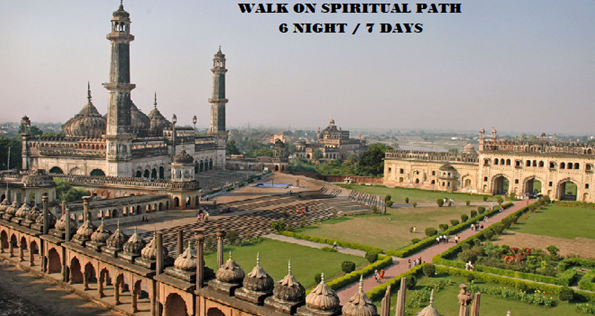 Day 01 -  Arrival transfer from Varanasi Airport / Station to hotel.
Varanasi, also known as Benares, Banaras or Kashi, is the holiest of the seven sacred cities (Sapta Puri) in Hinduism and Jainism, and played an important role in the development of Buddhism. Hindus believe that death at Varanasi brings salvation. It is one of the oldest continuously inhabited cities in the world. Varanasi is also known as the favourite city of the Hindu deity Lord Shiva. Varanasi is also famous for housing numerous temples. Several temples in Varanasi have great religious and historical importance in Hinduism. There are many temples, erected at different times throughout the history of Varanasi. Some of the popular temples are listed herein. In varanasi you will visit the most famous temple such as Bharat mata madir (Mother india temple ) Durga temple, Tulsi manas temple, Sankat mochan temple , Banaras hindu University, New Kashi vishwanath  temple(also known as Birla temple ).  Later in the Evening visit Aarti ceremony, Experience the beautiful Hindu ritual Aarti on this evening tour in Varanasi, where Hindu mythology says the soul is liberated from the body. You'll learn about the combination of physical, metaphysical, and supernatural elements as you listen to religious songs sung in praise of the gods and watch lamps being raised into the sky on the River Ganges.O/night stay at  hotel.
Day 02 – Boat ride

Early morning boat ride at river ganga ,Boating down the Ganges River during sunrise is one of the main attractions in Varanasi. We can observe here the Hindu way of life along the banks of the Ganges (Ghats) River.
Start your day with a morning boat ride at dawn. You have a chance to observe the Hindu way of life along the bank of the Ganges River (Ganga Ghat or Banaras Ghat). Varanasi presents a unique combination of physical, metaphysical and supernatural elements. According to the Hindu mythology. In the afternoon  visit Sarnath,  Sarnath is a city located 13 kilometres north-east of Varanasi near the confluence of the Ganges and the Varuna rivers in Uttar Pradesh, India. The deer park in Sarnath is where Gautama Buddha first taught the Dharma, and where the Buddhist Sangha came into existence through the enlightenment of Kondanna. Singhpur, a village approximately one kilometre away from the site, was the birthplace of Shreyansanath, the Eleventh Tirthankara of Jainism, and a temple dedicated to him, is an important pilgrimage site.
Also referred to as Isipatana, this city is mentioned by the Buddha as one of the four places of pilgrimage to which his devout followers should visit, if they wanted to visit a place for that reason. It was also the site of the Buddha's Dhammacakkappavattana Sutta, which was his first teaching after attaining enlightenment, in which he taught the four noble truths and the teachings associated with it. O/night stay at hotel.

Day 03 – Morning after breakfast drive to Allahabad (130 kms / 3-4 hours ).
Allahabad - Allahabad or Prayag, is a large metropolitan city in the Indian state of Uttar Pradesh and the administrative headquarters of Allahabad District, the most populous district in the state and 13th most populous district in India and the Allahabad Division. The city is the judicial capital of Uttar Pradesh with Allahabad High Court being the highest judicial body in the state. As of 2011, Allahabad is the seventh most populous city in the state, twelfth in the Northern India and thirty-sixth in India, with an estimated population of 1.11 million in the city and 1.21 million in its metropolitan region. In 2011 it was ranked the world's 130th fastest-growing city. Allahabad, in 2013, was ranked the third most liveable city in the state (after Noida and Lucknow) and twenty-ninth in the country. After arriving in Allahabad visit the attraction point in Allahabad such as Trivedi Sangam, Trivedi Sangam, In Hindu tradition Triveni Sangam is the "confluence" of three rivers. Sangama is the Sanskrit word for confluence. The point of confluence is a sacred place for Hindus. A bath here is said to flush away all of one's sins and free one from the cycle of rebirth.
Anand Bhawan,
The Anand Bhavan is a historic house museum in Allahabad, India focusing on the Nehru Family. It was constructed by Indian political leader Motilal Nehru in the 1930s to serve as the residence of the Nehru family when the original mansion Swaraj Bhavan (previously called Anand Bhavan) was transformed into the local headquarters of the Indian National Congress. Jawahar Planetarium, the planetarium is situated here, which has been striving to inculcate scientific temper among masses through its sky shows on astronomy and science.
Anand Bhavan was donated to Indian government in 1970 by the then Prime Minister Indira Gandhi, the granddaughter of Motilal Nehru and daughter of Jawaharlal Nehru. Also visit rest of the place like
Chandra shekhar azad park. O/night stay at hotel.

Day 04 - Morning after breakfast drive Chitrakoot (130 kms / 3-4 hours)After arrive in chitrakoot visit the attraction of Chitrakoot , such as Hanuman Dhara
Hanuman Dhara
There is a stream of water falling upon the deity of lord Hanuman releasing in a kund and there are langoors in this area which are well associated with Hanuman, the monkey God.The story behind this place says that Hanuman came to this place to extinguish the fire that was caught in his tail after he returned from burning Lanka.
Ramghat, Chitrakoot Overview
Mandakini river is lined up by ghats called Ramghat. Ramghat is where lord Ram, Sita and Lakshman appeared in front of the famous poet Tulsidas and he used to sit on the river side and write Ram Charitra Manas.The fragrance of incense sticks and the hymn of holy chants by the saints in saffron clothes makes the soul calm and touched. You can go for boating in the river and enjoy the beauty of this place until the evening and attend the arti with beautiful diya lightings, sounds of bell and holy chants.

Gupt Godavari, Chitrakoot
This is a pair of caves, in which there is a tiny entrance, through which one can barely pass. Water trickles down in streams through the other cave, which can rise up to the length of our knees. It is said that Lord Rama and Lakshman once held their secret meetings, which is validated apparently by the throne like structures present in the cave.Although Chitrakoot is primarily a spiritual destination, there are some hidden surprises for bold travelers, especially those with a taste for adventurous, sometimes risky trips. Among such surprises is the series of caves named Gupt Godavari. One would be surprised as to how this cave is largely unknown to the world, despite its mystic charm matching the likes of Elephanta caves, Ajanta and Ellora caves as the list goes on. This is a place that is slowly emerging as one of the most popular destinations of India, owing to the enigmatic charm of nature. So if you're visiting _Chitrakoot, don't even dare to miss this site.O/night stay at hotel.

Day 04 – Morning after breakfast drive to to Ayodhya (280 kms / 6-7 hours ). Later visit the most attraction point of Ayodhya such as RAM JANMABHUMI TEMPLE
Ram Janmabhoomi Temple
The area although has been a center of dispute since the destruction of the Babari Masjid, the Ram Janmabhoomi Temple is one of the major attractions in Ayodhya. The place is considered to be the birthplace of Lord Ram the 7th incarnation of Lord Vishnu. The original temple was said to have been demolished by the Mughal emperor Babur in 1528 AD and built a mosque at the site. The mosque however was demolished in 1992 and the area has since been a ground of dispute among the Hindus and the Muslims in India.
Moti Mahal
One of the fine specimens in Mughal Architecture, the Moti Mahal was the residence of wife of Nawab Shuja-ud-daula and was constructed in 1743 AD. The palace is situated in the nearby town Faizabad and is famous for its unique architecture and is frequented by many tourists. O/night stay at hotel.
Day 05 – Morning after breakfast visit rest of the s/seeing such as

Ram ki Paidi at Ayodhya
Ram Ki Paidi is the attractive bathing ghat built for the convenience of multitude of Ram devotees to have a sacred bath in holy Sarayu waters. Ram ki Paidi was constructed during 1984 near Nayaghat on the banks of river Sarayu in Ayodhya in Uttar Pradesh. Here we find number of ghats, which are crowded during festival days and in other days in normal number of devotees taking bath to wash of their sins. That means Sarayu would take their sins and while so purifying them she becomes impure for getting all their sins to become a greater sinner and ultimately carries it to the sea to make the sea water more Salter than what it is.
Hanumangarhi
Hanumangarhi is a temple of Lord Hanuman in Ayodhya. More than 70 steps lead to the main Hanuman temple which is one of the most popular temples of Lord Hanuman in North India.It is a custom that before visiting lord Ram temple one should first pay visit to shri lord Hanuman temple.also visit some other attraction, O/night stay at hotel.

Day 06 -– Morning after breakfast drive to lucknow via Naimisharanya(160 kms /3-4 hours ).
Naimishranya. Visit local place in NAIMISHARANYA.
After arrive in lucknow , visit some amazing place such as Bara Imambara.
Bara Imambara - The Bara Imambara of Lucknow is one of the most famous monuments of the city. Also known as Asfi Imambara, after the name of the Nawab of Lucknow who got it constructed, it is an important place of worship for the Muslims who come here every year to celebrate the religious festival of Muharram. The Imambara is primarily known for its incredible maze, known as Bhul Bhulaiya locally, which is located on the upper floor of the monument.Said to be the world's largest unsupported structure, Bara Imambara is considered a marvel of engineering and a fine specimen of Mughal architecture. In the vicinity, religious centres like the Asifi Mosque, Shahi Bawali, Rumi Darwaja, etc., are also present for one to explore. The Bara Imambara has a unique style of construction. The central hall of Bara Imambara, which is said to be the largest arched hall in the world, measures 50 meters long and goes up to a height of 15 meters. The whole building is made of Lakhanui bricks, which are a bit small in size, and lime plaster. No wood or metal has been used in the construction. One can also have a view of the grave of Nawab Asaf-Ud-Dowlah and his crown, which is kept in the central hall. The Bara Imambara is worth seeing in its own right, but the unusual labyrinth of corridors on its upper floor (Bhul Bhulaiya) is what steals the show.
Hazratganj Market
Hazratganj Market, LucknowHazratganj, the central shopping district of Lucknow, has a long history behind it and has undergone a great makeover that bridges the past and the present and continues to serve as Lucknow's central shopping arcade.O/night stay at hotel.